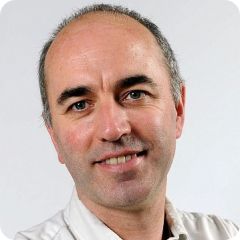 Guy A. E. Vandenbosch received the M.S. and Ph.D. degrees in Electrical Engineering from the Katholieke Universiteit Leuven, Leuven, Belgium, in 1985 and 1991, respectively. Since 1993, he has been a Lecturer, and since 2005, a Full Professor at the same university. Guy Vandenbosch has taught or teaches courses on “Electromagnetic Waves”, “Antennas”, “Electromagnetic Compatibility”, “Fundamentals of Communication and Information Theory”, “Electrical Engineering, Electronics, and Electrical Energy”, and ”Digital Steer- and Measuring Techniques in Physics”. His research interests are in the area of electromagnetic theory, computational electromagnetics, planar antennas and circuits, nano-electromagnetics, EM radiation, EMC, and bio-electromagnetics. His work has been published in ca. 330 papers in international journals and has led to ca. 390 presentations at international conferences. In the period 1999-2004, he was vice-chairman, in the period 2005-2009 secretary, and in the period 2010-2016 chairman of the IEEE Benelux Chapter on Antennas and Propagation. In the period 2002-2004 he was secretary of the IEEE Benelux Chapter on EMC. In the period 2012-2014 he was secretary ofthe Belgian National Committee for Radio-electricity (URSI), where he is also in charge of commission E. Guy Vandenbosch is a fellow of the IEEE. From September to December 2014, he was a visiting professor at Tsinghua University, Beijing, China. Since 2017 he is a member of the IEEE Electromagnetics Award Committee.

Any cookies that may not be particularly necessary for the website to function and is used specifically to collect user personal data via analytics, ads, other embedded contents are termed as non-necessary cookies. It is mandatory to procure user consent prior to running these cookies on your website.