Conventionally, massive MIMO is a system in which the base station has many antennas serving multiple single-antenna users. Typically, the number of base station antennas is one order of magnitude more than the number of users. Since we have a large number of antennas at the base station, we can generate and allocate separate narrow beams to each user. This beam allocation is called spatial filtering. So, each user can use the same time and frequency resources simultaneously, but illuminated with separate antenna beams. By applying appropriate phase shifts to each element of the antenna array, the pattern of the antenna is steered in the desired direction, which is called beamforming.  The main goal of beamforming is to create a directional path between the base station and the user through separate array beams. These spatial beam diversities increase the spectral efficiency, energy efficiency, and security of the link. In an analog beamformer, the received signals are combined coherently at RF while in digital beamformer, the coherent combination of the received signal from each element occurs after digitizing the RF signals. The beamformer architecture is a hot research topic aiming to reduce the number of RF chains by optimizing and combining the analog and digital beamformers.

In the Digital Beamformer (DBF) architecture, each antenna element is connected to a Radio Frequency (RF) chain. In other words, the number of RF chain and antenna elements is equal, as shown in Figure 1(a). Each RF chain consists of Analog to Digital Converter (A/D), Digital to Analog (D/A), upconverter, amplifiers, filters, and switches. In the digital beamforming process, all the beamforming algorithms and phase shifts are implemented in baseband after digital sampling. This architecture benefits from flexibility in pattern and high performance, where multiple beams can be generated simultaneously; however, it is costly and power-consuming. Furthermore, calculating the channel state information for digital beamformers at massive MIMO suffers from overhead.

In the Analog Beamformer (ABF) architecture, one RF chain is connected to all antenna elements by an analog beamformer network, as seen in Figure 1(b). In this architecture, the antenna phase shifts are controlled with external hardware called phase shifters.

Hybrid Beamformer (HBF) phased array technology exploits the low cost and energy efficiency of mixed-signal RF components to implement cost-effective MIMO transceivers. This approach has received significant interest in exploring new architectures for the RF chain. The most common kinds of hybrid beamformers are i) fully-connected and ii) partially-connected HBF. In the former, all the array elements are connected to an RF chain, as shown in Figure 2(a). In contrast, in the latter, each sub-array of antennas is connected to an RF chain as shown in Figure 2(b). The partially connected structure benefits from the reduced cost and complexity compared to the fully connected architecture. 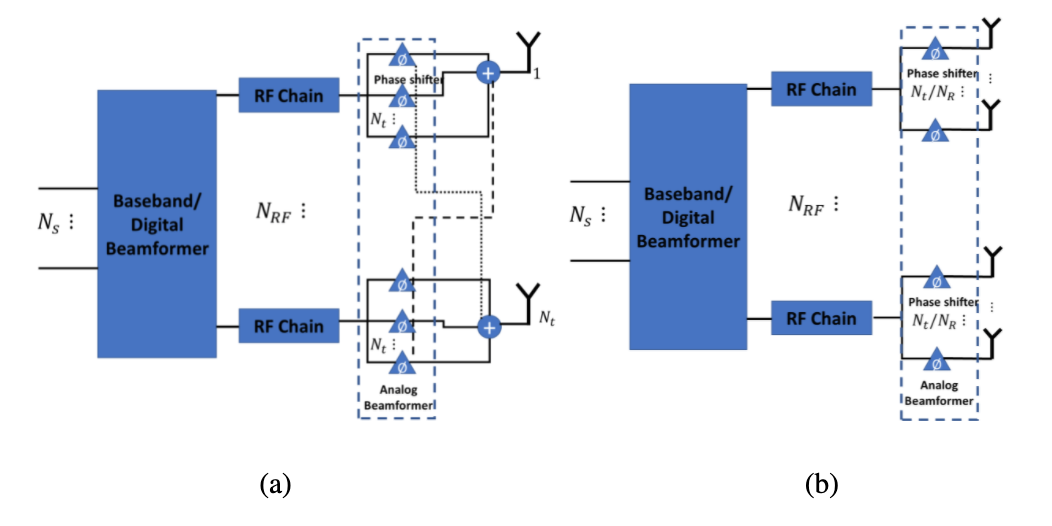